Castor seed is an ancient ingredient that’s rich in antioxidants and vitamins. Pressed from the bean of a castor plant, its oil can deliver intense moisture and nourishment to the hair and skin. It has long been used as the “beard growth oil” to promote healthy and fast-growing hair.

Natural plant oils such as Castor oil is so underused in modern beauty regimes. Pick up any botanical or seed oil, and it’s likely to be absolutely bursting with vitamins, minerals and antioxidants.

You might spot them here and there in regular creams and lotions, but the best way to reap the wealth of benefits is to go straight to the source.

Quick Summary: In a hurry? If you do not have time to read the full article, we recommend Bossman as the best oil for beard growth, you can Click Here to see price on Amazon.

How Effective is Using Castor Oil for Beard Growth?

There is no doubt that castor oil is beneficial to hair, but perhaps not in the way some people believe.

It’s important to recognize that we cannot “speed up” our hair growth rate. How fast our hair grows, and the length it reaches, plateaus, and sheds at is down to the genetic lottery.

Genetics play perhaps a more significant role for men, as they dictate how fast and how early a man might lose his hair. That said,  pattern baldness can affect both men and women.

Castor oil is not a cure-all for this kind of hair loss. It can nourish the hair and scalp, but it simply isn’t powerful enough to override or reverse hormonal or genetic conditions.

However, not All hope is lost.

The key phrase here is ‘in the diet’ – supplements might actually yield better results than applying oil.

But supplementing and boosting an omega-rich diet with External application of fatty acids is important, as our bodies need a extra help to deliver nutrients to the outermost reaches of our skin. 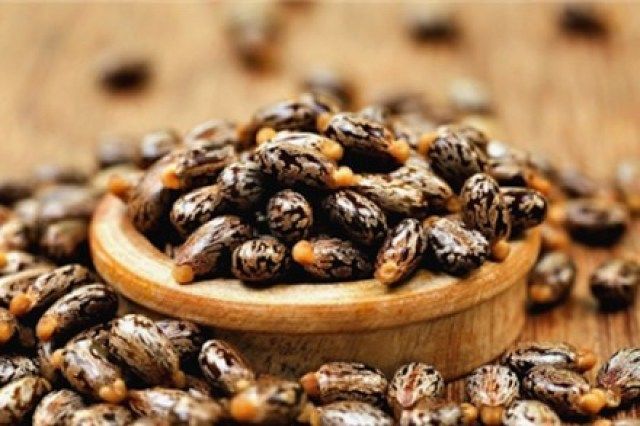 Castor seed is very rich in omega-6 and omega-9 (ricinoleic) fatty acids. So applying castor oil in combination with a diet rich in plant oils, nuts and seeds – you’ll have your best shot at prolific and luscious hair growth.

Most promisingly, omega-9 is linked to PGD2 and PGE2 – naturally occurring substances in the body.

Let’s take a look at what nutrients and compounds are present in this magical castor oil below…. 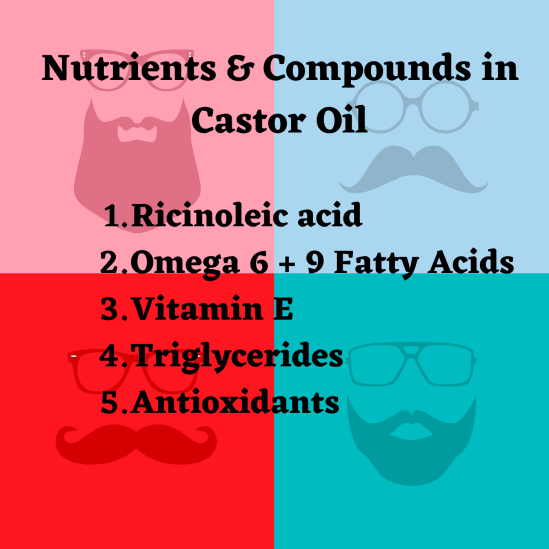 Ricinoleic acid: A high concentration of ricinoleic acid is found in castor oil. The suffix ‘oleic’ in an ingredient name tells us that it’s a fatty acid – in this case, an omega-9 unsaturated fatty acid.

Omega 6 + 9 Fatty Acids: Castor oil contains essential fatty acids are the building blocks of healthy cells. They form the skin’s natural barrier, and act as humectants that aid the skin to draw in moisture from the air.

Vitamin E: One of the most important vitamins for hair and skin health, vitamin E plays a crucial role in nourishing, protecting and healing the scalp and hair follicles.

Triglycerides: Castor oil contains triglycerides which help to remove dirt from the skin, and maintain moisture.

The 3 anti’s: Castor oil is anti-inflammatory, anti-fungal, and anti-microbial.

Antioxidants: Antioxidants fight free radicals. The unstable oxygen particles in the atmosphere that cause skin, hair and follicle cells to break down, otherwise known as ‘oxidative stress’.

Bacteria and fungal cells on the skin or scalp are enemies of prolific hair growth. They are common problems for beard-growers, especially if facial hair is particularly dense.

The most important thing castor oil can help with is to clear the way of anything that might inhibit growth.

In the same way that trimming hair on your head helps it to “grow” by preventing split ends from destroying the length, the anti-fungal and anti-microbial properties of castor oil treat harmful bacteria on the surface of the skin. This will remove the bacteria that is blocking or harming the follicle. 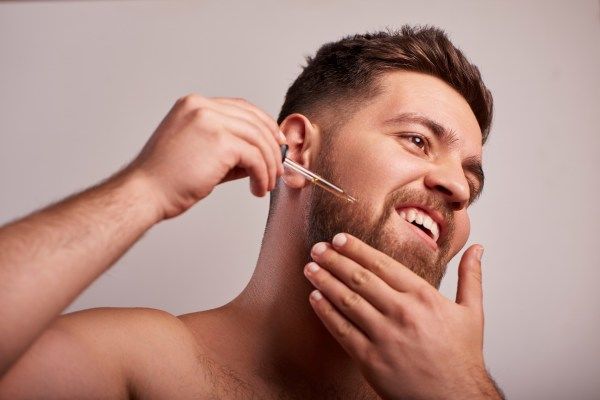 Returning again to the hair example, hair on your head cannot grow long and strong without adequate moisture. Without moisture, it will become brittle and break before it can reach any substantial length.

Beard hair does tend to be stronger and coarser, but it still benefits hugely from the nourishing vitamins and fatty acids found in castor oil.  They have the power of rebuilding and maintaining the moisture barrier that protects your facial hair from external damage.

The proof will be in the noticeable shine and softness, and decreased “bristliness”, of your beard hair.

Adequate moisturizing of the skin underneath your beard also prevents it from drying and flaking, preventing dead skin cells getting trapped under the facial hair. As a result, castor oil protects and promotes your beard growth by keeping adequate moisture within your hair follicles.

Finally, applying a light coat of castor oil to a long beard (or mustache) can act as a holding balm. It allows you to create styles and braids, or simply to smooth down stray hairs and flyaways.

Want to grow a think and healthy beard? You need to use castor oil today to get started with your beard-oiling journey! But before you make your purchase, you might want to consider castor oil based products that are formulated with other oils, in order to boost maximum beard growth.

Unlike many other oil-based products, Bossman Jelly Beard Oil is, as the name suggests, a thick jelly that coats and nourishes your beard hair and the skin underneath.

It’s designed to act as a more intense and long-lasting hydrator than castor oil alone – it is more like a butter than an oil, slightly less messy to apply. This beard growth oil is formulated with the added benefits of beeswax, avocado oil, shea butter and cocoa seed butter.

Interestingly, avocado oil is a known natural remedy for dandruff. So if you experience dry skin or flakiness in the beard region, this might be the perfect concoction. It also boosts collagen production, which may make your beard look fuller.

All of the oils in the mix are rich in vitamin E, plus we can see the added boost of tocopherol in the ingredients list, which is vitamin E in its purest, most active, natural form.

This works to assist in maintaining facial hair growth, and the antioxidants inherent in vitamin E and the combination of plant oils protect against free radicals. Beeswax is also present to fight any fungal or bacterial infections on the surface of the skin. It’s rated as one of the best oil for beard growth.

Scent: A nice bonus of Bossman Beard Oil is that it’s scented with sandalwood and vanilla, so it can even act as an alternative to cologne.

A more traditional, no-frills beard oil, Mountaineer Brand Oil is formulated to hydrate the face and beard. It can counter itchiness, and prevent flakes. Healthy, well-nourished skin makes for a healthy beard.

The leading ingredient in this oil, grapeseed oil, is shown to improve the skin’s elasticity and softness. This is particularly beneficial for a male skincare routine, as years of shaving facial hair, can leave it coarse and bumpy.

All of the oils used are non-comedogenic, meaning they won’t block pores. So you don’t have to worry about the product causing spots.

In fact, all of the plant based oils included in Mountaineer Brand Beard Oil are lauded for their spot and acne alleviating powers.

They nourish the skin without overloading, and their inherent vitamins and minerals work to increase cell turnover and sterilize acne-causing bacteria.

Fir needle oil is a particularly effective astringent. It means it can also help with skin conditions such as psoriasis and eczema. Mountaineer’s rated as one of the best oil for beard growth.

Scent: There are no added perfumes, just the natural scents of the castor oil and tree oils, making it an even better option for those with sensitive or easily irritated skin.

Do you want to grow a strong, healthy-looking beard? Beard Farmer’s Growther Beard Oil is no regular beard treatment.

Besides castor oil, it is formulated with an impressive 15 botanical ingredients that have been consciously combined to create the

Many buyers have reported success in boosting their beard growth with this oil, and in re-growing patches that were sparse or slow-growing. This can be attributed in part to the inclusion of avocado oil, which as we know treats dandruff and promotes collagen, an essential building block in the hair and skin.

Thyme and cedarwood are both believed to act as stimulants for hair growth, which might go a way to explaining the success many have had with this product.

Cypress acts in a similar way to castor oil – naturally shrinking and tightening pores in order to halt the hair loss cycle.

Beard Farmer’s Beard Growth Oil is a pricier option. But it’s so packed with precious oils, botanicals and vitamins that aid in beard growth. So you might find it’s worth every penny.

Scent: Despite the many ingredients, the scent is light, citrusy and not overpowering.

A common concern when integrating oils into a skincare regime is if it will make the skin more oily. But in fact, the opposite is true.

Most plant-based oils are non-comedogenic (meaning they don’t clog pores), anti-bacterial, and light enough to nourish without overloading the skin.

For example, Castor oil has a comedogenic scale of 1 out of 5. It means castor oil will highly unlikely to clog your pores. Some (like tea tree, rosemary and ylang ylang) are even recommended for balancing oily complexions.

2. How much castor oil should I apply?

With castor oil, a little goes a long way. Start with 2-3 drops rubbed between your palms and smooth it on. It’s beneficial to create a little bit of contact with the skin so your hair follicle will absorb the nutrients too. If your beard is particularly thick or long, add another couple of drops.

3. When should I apply or use castor oil?

Use castor oil for beard after showering is ideal. Your pores and follicles will be open, ready for maximum nourishment and absorption. You can apply it any time of night or day. Please bear in mind that oils can increase sensitivity to UV rays. So the only time to avoid it would be before spending a substantial amount of time in direct sunlight.

4. Are there any side effects from using castor oil for beard?

In very rare cases, using castor oil for beards can cause irritation, and for some people, an allergic reaction. Take care not to apply it on cuts or broken skin. If you’re unsure, conduct a patch test by blotting a small amount behind your ear or in the crook of your arm. Then wait 24 hours before applying fully.

5. Beard oil vs Beard balm – What is better?

Beard oil is designed for short to medium length beard. It is in liquid form at room temperature. Mixture of natural oils such as castor oil, coconut oil, jojoba oil, castor oil, grapeseed oil, sunflower seed oil etc, are the main ingredients. The purpose of using oil for beard, is to nourish and moisture your beard. Some beard oil with castor oil can assist in promoting beard growth. Beards oil with lemongrass, eucalyptus, and peppermint oil have antifungal + antibacterial properties.

Beard balm is designed for medium to long length beard. It is in wax or soft solid form at room temperature. Most men use beard balm mainly for holding or styling. It also functions as a leave-in conditioner that that moisturizes, nourishes and soothes your beard. Most of the beard balm in the market are made of shea butter and beewax as a base, plus a carrier oil (such as almond oil), plus 1-2 essential oils which gives the scents.

Castor oil might not be the miracle “beard growth oil”, but there’s no doubt it can aid, nourish and enable what’s naturally there.

5 Reasons to Use Coconut Oil for Beard: Top 5 Products and Tips